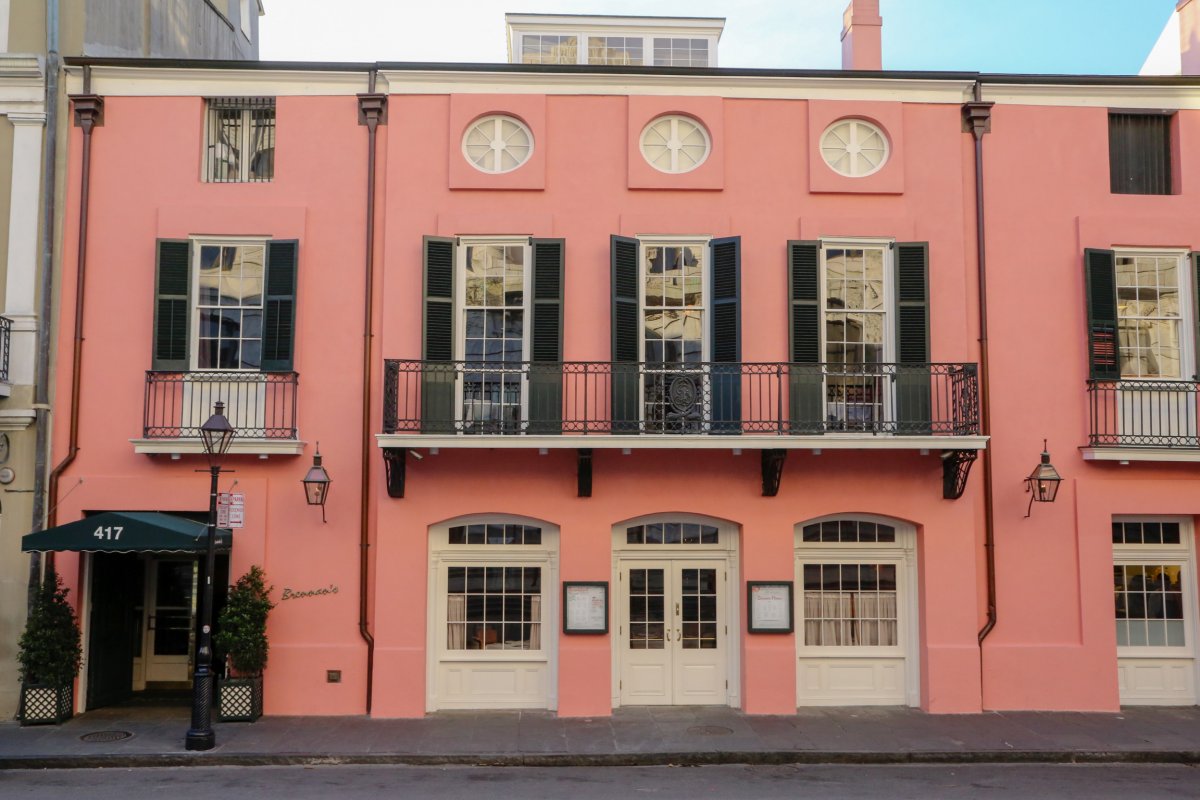 Stroll down Royal Street in New Orleans French Quarter; you can’t miss a stately cotton candy pink building, #417, that houses Brennan’s restaurant, a dining institution since 1946. The building was constructed by the great, great grandfather of the artist, Edgar Degas, whose relatives had a home on Esplanade Street (now the Degas House inn and museum). In the early days, this building housed the Louisiana State Bank. Later it was a private residence for Paul Morphy, a chess master.

The restaurant was first opened in 1946 on Bourbon Street by Owen Brennan, an Irishman who ran the popular bar Absinthe House. Called Owen Brennan’s Vieux Carré the cuisine was haute French. It relocated to its current location in 1956. Today it is owned and operated by Ralph Brennan, Owen Brennan’s nephew. Brennan acquired the building in 2013 with his former business partner, Terry White, and oversaw an extensive 18-month renovation. As of July 2022, Brennan bought his partner’s share of the business and is the full owner.

My first visit to New Orleans was at the age of 14. My parents took me to Brennan’s for breakfast. I can still remember my first taste of Eggs Hussarde – a house-made English muffin topped with a perfect poached egg, coffee-cured Canadian Bacon, Hollandaise and Marchand De Vin Sauce, and Bananas Foster -sliced banana with brown sugar and cinnamon and rum flambéed tableside. Both dishes were created at Brennan’s. My parents let me taste the Brandy Milk Punch, another Brennan’s- and New Orleans- classic cocktail- made with milk, heavy cream, bourbon, vanilla bean, and ground nutmeg, strained and poured in a coupe. I felt so sophisticated!

For seven decades, Brennan’s has served its signature Creole cuisine to legions of customers. Many tourists reserve breakfast at Brennan’s as part of their New Orleans dining bucket list.  Breakfast and lunch are served Thursday through Monday. That is worth noting since many New Orleans restaurants are closed on Mondays.

But our preference is dinner at Brennan’s, a refined experience that recently reminded us (again) that this seventy-six-year-old Grande Dame of New Orleans restaurant is still at the top of its game. From the moment we walked in, we were warmly greeted by name and escorted to a table for two with a view of the restaurant’s lush courtyard. Wine and Beverage Director Braithe Tidwell welcomed us with flutes of Delamotte “Brennan’s Private Label” Brut Champagne.

We settled in for the evening with cocktails. Mine was a seasonal special, the “Azalea,” Hendrick’s Gin, Apple Brandy, Raspberry, Lemon, and Egg White. David stayed with the classic Sazerac, a cocktail born in New Orleans.  Tidwell oversees an extensive wine list that has earned several recognitions, including Wine Spectator Grand Awards. The two-story wine cellar houses 15,000 bottles; the second floor alone is dedicated to wines of Burgundy. For our meal, we selected a St Aubin Burgundy 2020.

Brennan’s calls itself the “Champagne House of the South.” The cellar houses nearly 100 selections of Champagne. At 5 p.m., Thursdays through Sundays, a champagne sabering takes place in the courtyard.

Riz Au Lait was a creamy short-grained rice custard with Sauterne sabayon and shaved black truffle. This dish is a standout. We also tried the shrimp remoulade served en gelée with Castelvetrano olives. This lighter dish is cool and refreshing on those steamy New Orleans nights.

Entrées were generous. I selected Blackened Redfish with crab and parsnip écrasé and smoked garlic. The latter added a pleasant flavor dimension to the Cajun spices on the blackened fish. I made a mental note to return for the Gulf Fish En Persillade with Poached Oysters and Sunchoke Fondant, which I am told is superb.

We ordered the Dry-Aged Lacquered Duck rare to ensure its tenderness, which it certainly was. This dish is served with preserved fruits which brought out the sweetness of the lacquered duck and “dirty farro, a twist on classic dirty rice.

Of course, for dessert, we had to have Bananas Foster. The late Ella Brennan created and named this dish for Richard Foster, a family friend who worked with the Metropolitan Crime Commission. The Brennan family owned a fruit warehouse and had a surplus of bananas, so Miss Ella concocted “Bananas Foster,” which is sliced bananas, cinnamon, and butter flambéed with rum cooked tableside with a flourish.

But don’t skip the other desserts! Order a selection for the table. We were enamored by our Crêpes Fitzgerald, Louisiana strawberries, and cream cheese folded into crêpes with Luxardo Maraschino Liqueur flambéed tableside. This dish is another Brennan’s original.

Throughout the evening, team members came by to say “hello” and to check on us. We asked General Manager Christian Pendleton why a rooster is a symbol for Brennan’s. You will see the rooster on the menu, signs, and lapel pins worn by the restaurant team. There’s even a “Roost Bar” where one can enjoy cocktails overlooking the courtyard.

Here’s the story: In France, the rooster- or coq- is the Gallic symbol of courage and confidence. And it took a considerable amount of both for the affable Irish bar owner to open an haute cuisine French restaurant. At the time, “Count  Arnaud, owner of Arnaud’s Restaurant, told Brennan that an Irishman’s culinary skills were limited to boiled potatoes, and he would never make a successful restaurateur. Determined to prove the Count wrong, Brennan opened his namesake restaurant.

Mindful of the cost of opening a fine dining restaurant, Brennan decides to make breakfast a dazzling display of culinary ingenuity. After all, eggs were not that expensive compared to meat. Thus, signature dishes like Eggs Hussarde and Eggs Sardou were introduced. On Brennan’s current breakfast and lunch menu, I counted six different versions of egg dishes, and there are more than just eggs. This is a breakfast for dining champions!

Stories like this one add to Brennan’s singular charm. Another involves turtles (not tied to the turtle soup!)  The restaurant’s courtyard fountain pool is home to an adopted family of 10 turtles. They even have their own “Krewe of Turtles” and a special turtle parade each spring.

Only in New Orleans! Only at Brennan’s!