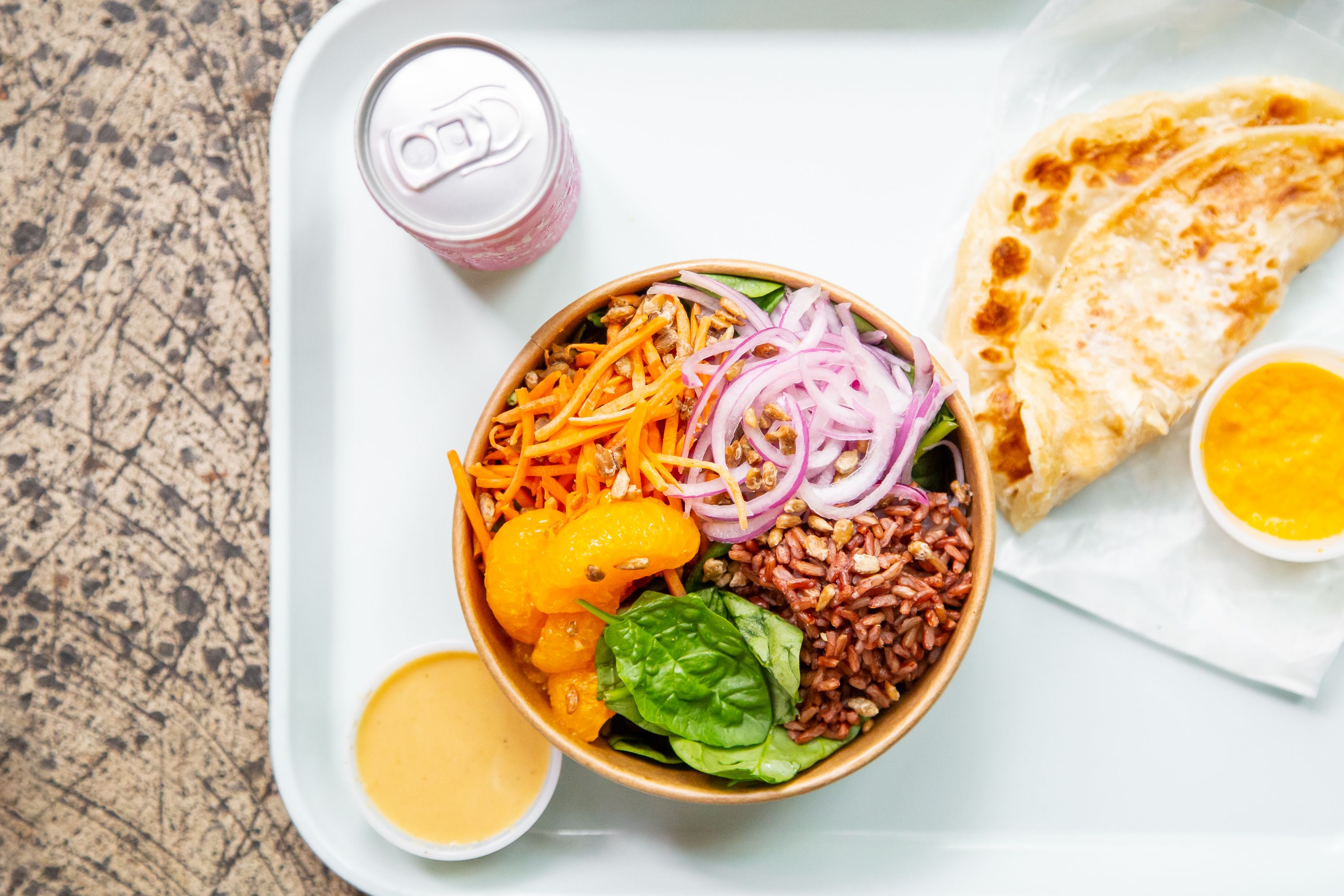 For Chef JJ Johnson, a bowl of rice shares a story of culture and community. As founder of FIELDTRIP, with three locations in New York City, Johnson delivers the global flavors of rice in the simplicity of a satisfying one dish bowl. Johnson founded FIELDTRIP in 2019 with the mission to create a community-based dining experience with rice as the connecter.

FIELDTRIP’S mantra is “Rice is Culture.” Johnson underscores that in many cultures, rice is the centerpiece and not a side dish. It’s a grain that graces tables around the world.

Each preparation is colorful, filling, and palate pleasing. Johnson starts with sustainable and ethically sourced, freshly milled heirloom grains, unbleached and not enriched. He layers in proteins and vegetables, all ethically sourced. You want to go back and order more!

Santé Magazine Food Editor Melanie Young asked Johnson to share a little more of his own journey, from working as a sous chef at Morgan Stanley to becoming a nationally acclaimed chef at The Cecil and Minton’s in Harlem to establishing his restaurant company, Ingrained Hospitality Concepts with a plan to take the FIELD TRIP concept to more communities.

Santé Magazine: Who or what inspired you to become a chef and at what age?

Chef JJ: When I was a kid (growing up in the Poconos), I cooked in my grandmother’s kitchen, and fell in love with food that way, in this very vibrant, loud, kitchen with my grandmother and my two great aunts. At about seven or eight, I told my parents I wanted to be a chef because I saw a commercial for the Culinary Institute of America. And that never stopped. As I got older, I tried to cook people’s birthday dinners – I burnt a lot of people’s birthday dinners.

My first job was as a dishwasher at a country club. It’s the only job I’ve ever been fired from because the chef took food in the garbage can and tried to feed it to people and I wouldn’t allow him to do it, which is like a horror story.

I toured all the culinary schools, and when I got accepted to the Culinary Institute of America, I went there. I was one of the worst kids in my class. And I wanted to quit. My dad talked me out of it. I graduated with my associate’s. And I promised my mom I would get my bachelor’s, so I went to Seton Hall in New Jersey. I stayed there for a semester. And that’s when I really realized that I ultimately loved food. I would be talking about food all the time, and people would look at me like I was crazy.”

Santé Magazine: Was there ever a time you wanted to pursue another career?

Chef JJ: Yes, there was a time in culinary school that I wanted to quit but my dad wouldn’t let me. If I wasn’t in the restaurant industry, I may have been a college basketball coach. But cooking is my hobby; it’s my love, so it was always what I wanted to pursue.

Santé Magazine: Tell me about the evolution of creating FIELDTRIP? What was your mission and how did you conduct your research?

Chef JJ: Traveling helped me come to the realization I was a part of Pan-African food and who I was as a person was part of that culture indirectly and I could start to express that flavor on the plate. As I started to fall in love with the ingredient rice, I realized it was at the center of every table, connecting different flavors and cultures. It seemed like such a special ingredient that didn’t get the recognition it deserves in the U.S.

My mission was to bring rice back to the center of the table. So, I was inspired to make rice my hero ingredient and the inspiration behind FIELDTRIP. I wanted to highlight how it’s harvested, how to cook it, and that it’s good for you. Glenn Roberts, the founder of Anson Mills, was my mentor as I did research around the country. I focused on the mother rice grains from around the world and showcased them at FIELDTRIP.

Santé Magazine: Rice is a staple found around the world, used in many cooking applications. As you conducted your research, what were some of the more eye-opening revelations you discovered?

Chef JJ: I found that rice can be utilized in so many ways. You can bake with it, it can be savory or sweet, there’s rice flour and rice milk. Most people think of rice as a basic side dish, but it has so much more potential if you are willing to be creative.

Santé Magazine: Why did you name your concept FIELDTRIP?

Chef: JJ: Field is a reference to the rice fields and trip is for the trips taken around the world and the huge inspiration that traveling plays in the menu.

Santé Magazine: How many types of rice do you feature?

Santé Magazine:  How often does the menu change?

Chef JJ: I am always working with my team to find new ways for guests to customize their rice bowls to make them exactly the way they like. For me, it’s all about being creative with the menu so guests can come back a few times a week and try something new every time. We change our wok veggies with whatever is in season at that time of year and sometimes feature a new seasonal bowl on the menu.

Santé Magazine:  What are some of your top sellers?

Santé Magazine:  What do most people need to know about preparing rice to obtain the optimum fluffiness?

Chef JJ: You have to use the right pot. Rice expands when it cooks so it needs the space to do so. You always need a pot that’s twice as large as the amount of rice you want to cook. If the rice doesn’t have enough room to expand it can get mushy or undercooked.  If you cook rice properly, you will have a crispy bottom which is the best part of the rice. You also have to let your rice rest just like you do with steak. You want to fluff your rice, season it, let it rest, and then fluff it once more to achieve the ultimate fluffiness. Only add salt after you are done cooking it.

Santé Magazine: Do you have plans to expand FIELDTRIP? If yes, please elaborate.

Chef JJ: We will be expanding to a couple more locations in NYC and ideally identify a second market outside of the city for further expansion

Santé Magazine:  You consider Chef Ed Brown, the President of Restaurant Associates, a mentor. What did he teach you?

Chef JJ: When I won “Rocco’s Dinner Party,” Ed took me under his wing. He is always there for advice on running a business and anything culinary and someone I have looked to for inspiration throughout my career. The best advice he gave me was “Don’t let nobody control your career. YOU control your career.” He is running one of the biggest dining management companies and I’m so thankful for the time that he gave to me.

Santé Magazine:   What would you say to young people today looking to work as a chef?

Chef JJ: Believe in the food and everything else will come.