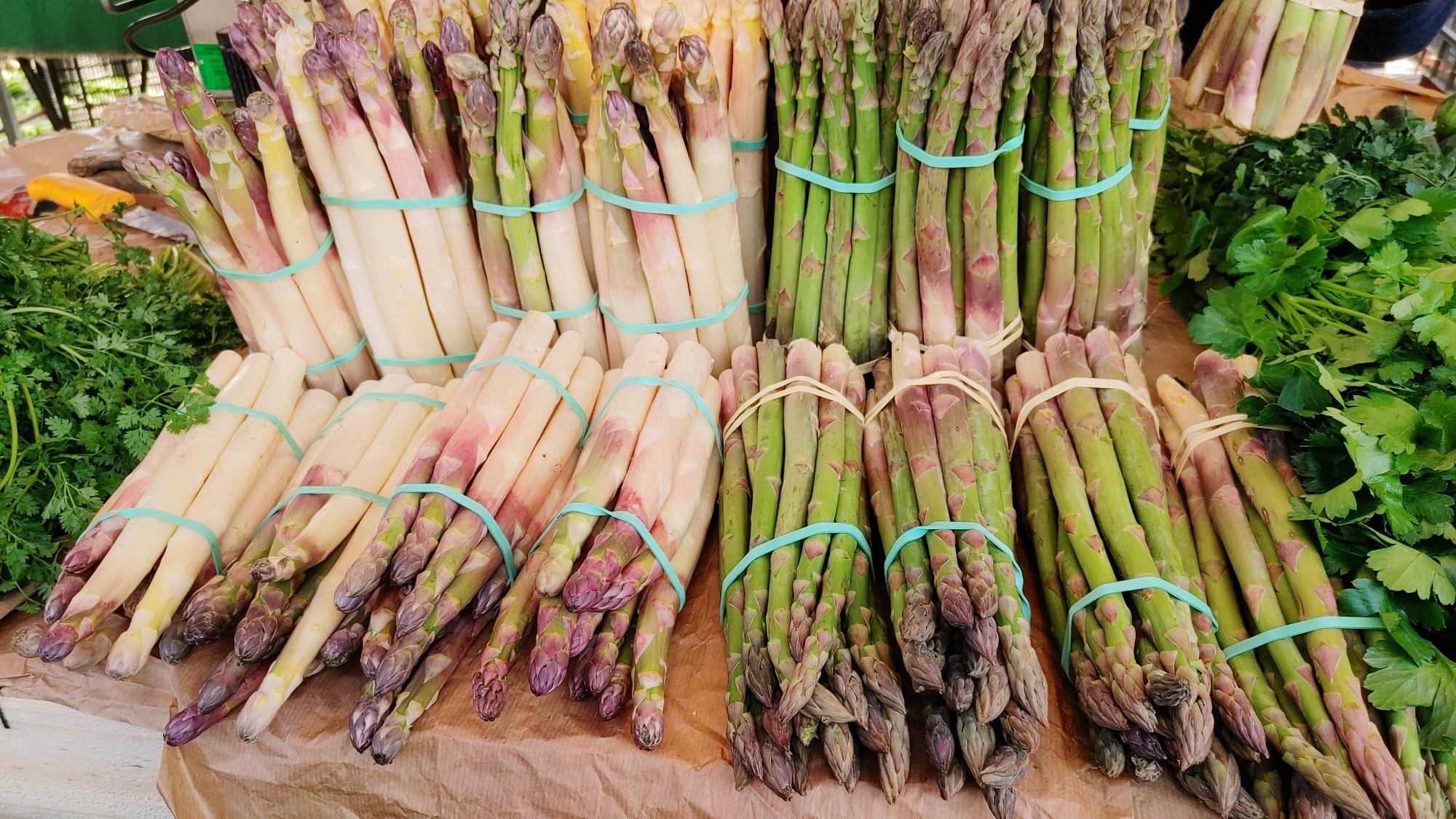 A visit to Paris in April welcomed us with an abundance of Spring asparagus at outdoor food markets around the city. Asparagus season begins in mid-April and runs through late June. Bundles of fresh white asparagus and their thick stalks caught my eye.

Usually, I consume white asparagus from a tin can or jar and mainly from Spain, but those fresh ivory stems sold in bunches at the farmer’s market are a rarity and a treat. They are best enjoyed in simple preparations with a milder, less grassy flavor than their green counterparts, such as boiled or steamed and drizzled with extra virgin olive oil or butter or fresh herbs.

In France, white asparagus are primarily grown in the Loire Valley, Landes, and to the south, both east and west. Germany and Spain are also large cultivators of the white stalks. In fact, Germans, who prefer white asparagus, have the name of their growing season, Spargelzeit, which begins mid-April and ends June 24, on St. John the Baptist Day.

According to Asperges de France, a national association of French asparagus growers which numbers more than 3000, in the 16th century, asparagus was so appreciated by the court of France that it was considered the queen of vegetables or “ivory to eat.”

While asparagus is grown in many parts of the United States, white asparagus and purple ones are still rarer than green. The Chef’s Garden in Huron, Ohio, a popular supplier to many fine restaurants, ships green, white and purple asparagus while in season. Info.

What creates the (non) color:

Larger spears are the most tender; select those with firm tips. The spears can be stored for up to three or four days in a refrigerated vegetable bin, and they can also be lightly blanched for three minutes and stored in a freezer.

Asperges de France advises, “Green asparagus do not require peeling. White and purple asparagus can be peeled from base to tip with a vegetable peeler. White and violet asparagus should be put into cold water and brought up to the boil, while green should only be put in when the water is already boiling.”

In Paris, we tasted asparagus preparations at the venerable Michelin-Star restaurant, Lucas Carton in the 8th arrondissement, and at the popular cocktail and wine bar, Le Mary Celeste, located in the Marais.

Mix or chop the bacon. Brown the breadcrumbs in a pan for a few minutes, remove from heat and mix with the bacon.

Pan-fry the asparagus over high heat in the bacon fat for 1 or 2 minutes. Put in a dish, and add the burrata and bacon crumbs. Then serve.